Forge Technology, Inc. can supply screw presses from leading manufacturers and re-builders that provide outstanding precision and are ideally suited close tolerance forgings of aluminum, brass, titanium, steel and other metals. High energy screw presses can forge parts faster, with fewer blows, and with more accuracy than hammers and are very well suited for automation.

The speed of impact on a screw press is faster than that of a crank type mechanical press and slower than the blow of a forging hammer. They are energy related machines in that the upper die moves down until the energy is absorbed by the deformation of the part or the press frame. Unlike a hammer, the blow of a screw press is precisely controllable over a wide energy range. Forgings can be produced with considerably fewer blows than on a hammer. The high-speed blow is well suited for precision forging and the brief die contact time limits the heat transfer to the dies which can increase tool life.

Because of the relatively simple design, screw presses are easy to maintain. There is no clutch to worry about, just an inexpensive and easy to replace leather friction belt. They are also quieter and cause less vibration than hammers. They are energy efficient and do not require large amounts of compressed air.

There are several different types of drive systems for screw presses but the most common are friction drive and direct drive. 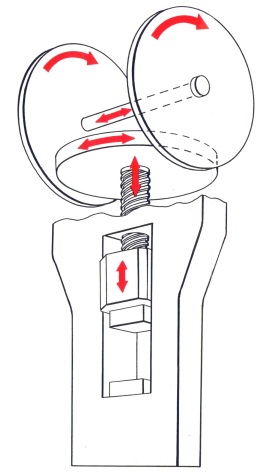 Friction drive screw presses have been around for many years. Properly operated friction drive screw presses are durable, easy to maintain machines since they are based on a relatively simple design. The energy is stored in spinning disks on the top of the press. These disks are driven by an electric motor and are constantly spinning. When the press is cycled, a cylinder pushes the spinning disks against a leather belt that is fit on the circumference of a flywheel fixed to the top of a big screw (usually a three lead screw). As the motion of the flywheel rotates the screw through a nut fixed to the frame of the press, the ram is forced down. The ram gains speed and energy as it is driven down. The time that the spinning disks remain in contact with the flywheel determines the energy that will be delivered by the forging blow. The blow energy can be varied from about 10% to 100% of the total available energy by adjusting this time and by adjusting the height of the stroke. The dies should be designed to come face to face so that the forging tolerances are built into the tooling and are not a function of the shut height as is the case with a mechanical crankshaft press. All of the energy of the blow is absorbed by the workpiece and the frame of the press absorbs any excess energy. The pitch of the screw is such that it doesn’t jam when the dies hit. There is usually a slight rebound bounce as the tools hit causing the screw to stop rotation and reverse direction. At this point the shifting cylinder shifts the spinning disks the other way and the opposite disk makes contact with the leather belt and turns the screw the other way to drive the ram up. A brake is applied to the flywheel when the desired top of stroke point is reached.

Direct drive screw presses work on essentially the same principle but instead of the spinning disks driving the flywheel with the leather belt, a huge electric motor is built around the flywheel itself. The motor is powered in one direction to turn the screw to drive the ram down, and it reverses to drive the ram back up. Instead of a brake, the motor stops the upward motion in an electricity generating braking operation. Typically the screw is fixed to the ram by a bushing and the nut is in the ram itself so that the screw/flywheel assembly does not move up and down. This keeps the motor windings from moving up and down during the stroke of the press. Direct drive presses have some advantages in that they have more flexibility in stroke height and energy and they tend to be faster than friction drive screw presses. Their disadvantages include higher cost and complex motor control systems.